We Bare Bears Wiki
Register
Don't have an account?
Sign In
Advertisement
in: Article Stubs, Characters, A to Z,
and 6 more
English

Amanda has black, puffy hair and fair complexion and wears eyeliner. She wears a panda-shaped hat and a pink shirt with matching denim shorts. For her footwear, Amanda wears low-cut socks and brown shoes. She can be seen wearing a panda backpack and possesses a phone with a casing designed with a panda in pink background.

Amanda is shown to be a kind, polite, and easy going young woman. In her introduction it is seen that she has several interests in common with Panda. They both like manga and boba tea. Interestingly Amanda was shown to have ordered the exact same drink as Panda and was reading the exact same series Panda was reading while the two were in the same Boba shop.

From her Panda themed hat, backpack, and phone-case, it is inferred that Amanda likes Pandas and they may be her favorite animal. Amanda may also like pink as the shirt she was wearing matched her cellphone color.

Amanda appears at the beginning of the episode at the Boba Shop that Panda is in. The two were both reading the same manga Summer Love and had ordered the same boba tea. Panda fell in love with her on the spot but when he stood up to speak to her found that Amanda had left. However she forgets her phone at the shop and Panda goes on a mission to find her before 6 PM.

Amanda headed to the ferry for a boat ride and unbeknownst to her Panda was not far behind. However, he lost track of her on the water and was kidnapped by a mad scientist. Amanda continued on the boat ride and headed for the train station. Right at 6PM she bumped into Panda who arrived thinking he was too late. Amanda recognized her phone and Panda returned it.

Amanda introduces herself as does Panda and the two realize their names sound similar. Panda tries to confess his love for her, but Amanda stops him because she has to take a train to the airport, as she's moving out of the Bay Area, much to Panda's dismay. Amanda hugs Panda and tells him that if she were ever to lose her phone again, she hopes that he would be the one to find it for her and proceeds to leave for her train afterwards. 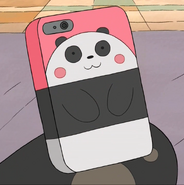 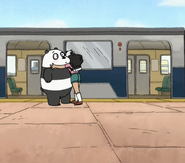