The Street Performers are various different minor characters who make their first and only appearance in the episode "Jean Jacket".

Aside from the Bears, they have no known names. 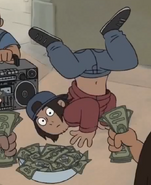 He wears a backwards slate cap, a red hoodie, slate jeans, and black sneakers. He has long, dark brown hair.

He wears a long-sleeved blue shirt, black jeans, blue socks, and brown shoes. He has long, brown hair.
Add a photo to this gallery

The street performers are seen at the beginning of the episode on, evidently, the streets. Apparently, they were trying to gain money for unknown reasons. The first three street performers shown, a break-dancer, a robot man and a guitarist, all get a ton of money. The Bears, on the contrary, only get 25 cents. Grizzly is beat-boxing, Panda is playing the tambourine and Ice Bear is playing the bagpipes.

It starts raining and, after an accident with the Bears' music sheet, they end up losing their 25 cents.

Retrieved from "https://webarebears.fandom.com/wiki/Street_Performers?oldid=158495"
Community content is available under CC-BY-SA unless otherwise noted.