The Mailman is a minor character whom appears very cheerful and outgoing. He makes his first appearance in the episode "Nom Nom".

He has tan skin and long, curly, dark brown hair. He also has a goatee. The Mailman can be seen wearing a light blue polo, a black belt with a silver buckle, and a blue hat and pants.

The Mailman went to the Bear Cave to deliver the Chop-o Choppa Copter to Grizzly, but ended up falling into a hidden trap that Nom Nom had set to keep Ice Bear from ruining his plans. Fortunately, he was holding the package when he fell and was caught by Ice Bear.

He is seating at a mat and watching the movie. 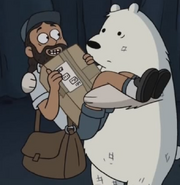 Add a photo to this gallery

Retrieved from "https://webarebears.fandom.com/wiki/The_Mailman?oldid=159199"
Community content is available under CC-BY-SA unless otherwise noted.