We Bare Bears Wiki
Register
Don't have an account?
Sign In
Advertisement
in: A to Z, Music, Songs,
and 5 more
English

We'll Be There is the theme song that opens into every episode of We Bare Bears. It was first shown at SDCC 2015.

Like the closing theme, this song is not available on Brad Breeck's SoundCloud stream, but is featured in both the television and movie soundtracks.

A covered version of the theme song, called Will You Be There? used in a promo for episode premieres all April 2017.

We Bare Bears - Opening Theme (We'll Be There)

Note that the information and chord chart below were created by an editor.
If you find an error you may correct it or post a message to the editor who uploaded the chart on their message board and it will be addressed. 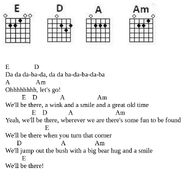